CeNCOOS enables partnerships and sustained engagement to promote information
sharing among a variety of disciplines and timescales. Exchange between modelers and end-users progressively advances a unified modeling framework with CeNCOOS providing the
important role of linking these groups so that local and regional models address specific user requirements — and more robust and widely used outputs. CeNCOOS also aids in the development of best practices — particularly in emerging technologies —  infrastructure and data assimilation techniques. 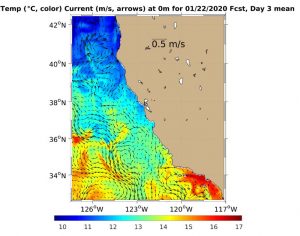 ROMS models how a given region of the ocean responds to physical forcings such as heating or wind and can also be used to look at how a given ocean system would respond to inputs like sediment, freshwater, ice or nutrients. Models provide an optimal interpolation of data at positions over the whole domain where it is impossible/impractical to have actual measurements.

The CeNCOOS region runs two different versions of the model: 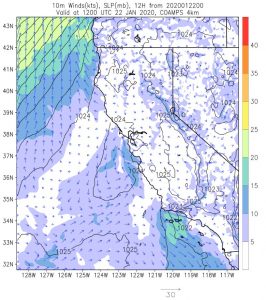 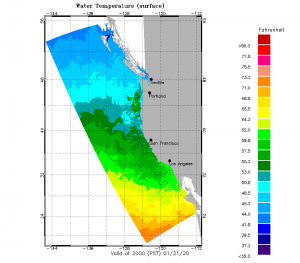 This model — which is currently in test mode and not yet operational — is run by NOAA CO-OPS and includes the complete West Coast of the U.S. It has a grid of approximately 4 km with some 2 km resolution and 40 vertical levels. The model is forced by the North American Mesoscale 12 km atmospheric forecast model, the Oregon State Tidal Model and the Global Real-Time Ocean Forecast System (G-RTOFS).

The model outputs water levels, currents, ocean temperature and ocean salinity. It is a version of ROMS. If the model becomes operational, it will take the place of both the ROMS versions. Those modeling groups would  then concentrate on other modeling outputs (i.e. high resolution subdomains, NEMURO embedding for biology). 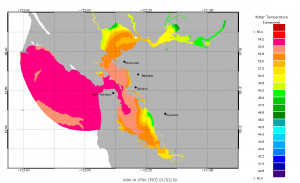 This model is run by NOAA CO-OPS for the San Francisco Bay and is a version of the Finite Volume Community Ocean Model (FVCOM) model with an unstructured grid (the resolution increases near coastlines). The model is forced by 4 km NWS output and G-RTOFS output. 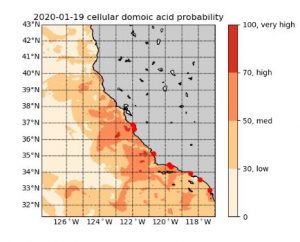 C-HARM is a probabilistic model for harmful algal blooms (HABs) run by NOAA CoastWatch West Coast (which was developed at CeNCOOS). This model uses satellite spectral reflectances and model temperature, salinity and currents to compute estimates of cellular domoic acid, particulate domoic acid and pseudo-nitzschia probabilities. The output provides a forecast of possible HAB events and helps resource managers determine where sampling may be most effective. 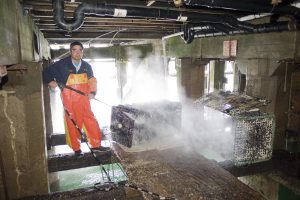 A newly funded project led by Dr. Chris Edwards, Professor at the University of California, Santa Cruz (UCSC), in collaboration with the Monterey Bay Aquarium Research Institute (MBARI) and CeNCOOS is identifying gaps in our observing system related to ocean acidification (OA) and seeking ways to fill those gaps to capture changing ocean chemistry along the California coast.

Adding to the complexity of the development of an OA forecast is upwelling along the California coast. Winds routinely drive currents that cause deep, cold, high carbon dioxide, low oxygen waters to rise to the surface nearshore. Once upwelled, these waters bathe nearshore habitats, impacting the rich and diverse marine life along the coast.

The team’s first step will be to look at the overall system of models to determine what OA-related measurements already exist. Although scientists have been measuring temperature and salinity for decades, routine observations for ocean acidification are relatively new, though the OA observing network has grown over the last decade through a variety of efforts. The team will consider how effectively the existing observations are at capturing changes in ocean chemistry. 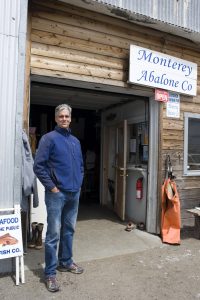 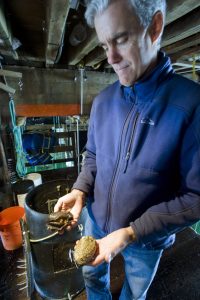